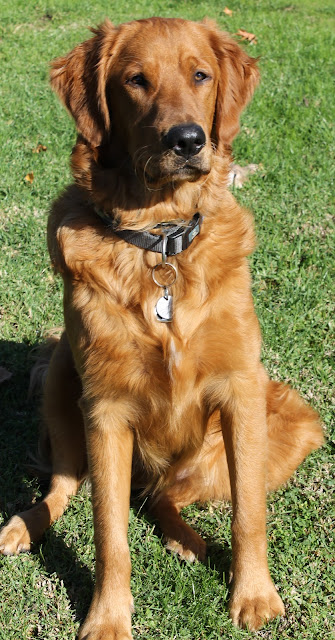 True to form, he's sleeping most days until noon and eating us out of house and home....and causing trouble.

He loves to play WWF with Silas, body-slamming him outside in the afternoons...pure entertainment.

He's gotten taller and lanky...and is officially the tallest of the pups.  He can comfortably rest his head on the dining room table when standing, an action which I don't encourage!

He's very uncoordinated and can't seem to get into the car these days without a bit of help...or either he's so smart to know I'll help him in the car with just a glance from that "poor puppy" face.

He lost a few pounds this month...down to 77.8 pounds.  I'm told this is typical for golden retrievers during their teenage years, but I'm still worried a bit.

And I'm also wondering how big he will get?  With his father weighing in at a lanky 106 lbs, I'm wondering if he'll be in the same range....lots of dog food to buy!

Email ThisBlogThis!Share to TwitterShare to FacebookShare to Pinterest
Labels: Dogs

He is just beautiful!