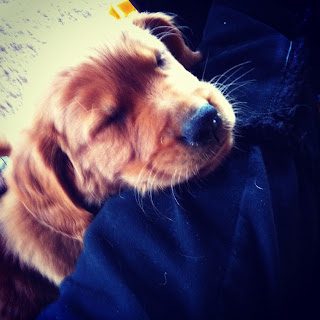 I know exactly what you're going to say...

I'm totally insane...and at this point I'd totally agree with you.

Can I just explain myself?

We need to have at least two dogs at all times living out in the canyons with all the various critters about...namely rattlesnakes. Sophie and Pheobe are definitely getting older, and Pheobe has a major case of arthritis at the moment.  If anything was to happen to these dogs, Silas would be alone...definitely not a good idea...especially against those darn coyotes!

oh he is just adorable!!! congrats!!

congratulations. GOldens are great dogs. Our heather was a real charmer. Now we have our Yellow and he is just as great. Not an aggressive bone..

He's precious! You are absolutely NOT crazy! I'd have a pack of dogs myself if I had the room. I love Edgar!!!!!!