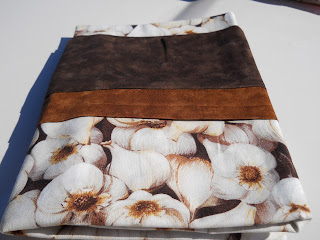 December 23rd: The day designated to pick up the Momma from her apartment to have her join us for our Christmas celebrations. Almost four hours driving as it was the Eve before Christmas Eve...the Friday starting the holiday weekend...even the normal shortcut didn't work this time.

December 23rd: The Momma's birthday...and no, I can't tell you how old she is, as it's not polite to tell a ladies age (and she'd probably smack me for doing so)!
- We had Chinese food delivered for dinner (her choice...I managed to choke down a few bites so I didn't appear rude)
- We celebrated with a Chocolate Chocolate-Chip bundt cake, but only one candle!

December 23rd: I delivered 32 pillowcases to the senior apartment complex for distribution....pirates, ducks, cats, dogs, flowers, chickens...all were a big hit!  They definitely were worth all the effort...the smiles were priceless!

And the big surprise?  There was a tug-of-war over the garlic pillowcase!

Email ThisBlogThis!Share to TwitterShare to FacebookShare to Pinterest
Labels: Sewing

Ha! Ha! Love the garlic pillowcase. What a great way to make someone feel loved and special. Have a super day!